So, I opened the case, which looks like it’s essentially an electronics box meant for some indoor installations. After opening the box, I was greeted with this sight 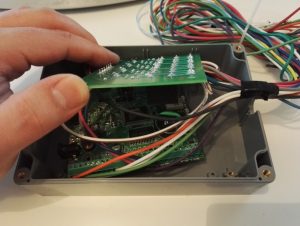 What’s essentially on top, is the relay board that transmits the +12V signals to the solenoids on the transmission as well as power to the main board. I did some mapping on where what goes, and the construction and finishing isn’t all that complex. The board itself looks like a basic Developement Board made by Z-World Inc., which ended up in the ownership of Digi. An evolution of this board is still sold and the schematics haven’t changed that much. The later versions look like they’ve just added an Ethernet port on it (and by the look of the board, this also might support it, it’s just lacking the chips and the port).

In any case, the board itself looks nice by the look of inputs and outputs. 9 ADC ports, 2 DAC ports, 10 outputs (I’m assuming +12V out), as well as three serial interfaces (two RS-232 I think and one RS-485) and 10 signal inputs. There’s also a JTAG port, but I don’t have a cable right now, so I can’t poke around with it.

Product page for the board is on Digi’s support site, found here

There are schematics, CPU manual and a User’s Manual for the Dynamic C Programming

In any case, this made me think if I should just ditch the Rabbit board, get an Upboard (Obviously the 4 GB RAM model with 64 GB eMMC) and a display from them to start designing a programmable head unit to do all kinds of other shit as well.