It’s been a long time since I posted, but there hasn’t been much anything post-worthy. In any case, most people know that AMD launched it’s Ryzen platform in the spring, and I’ve been drooling over either a Ryzen 7 system or a Ryzen Threadripper system to upgrade to – my old configuration has been around for (more or less) five years now.

Old specifications (for the main part) are:

Now that I’m upgrading, the configuration changes to this (as Threadripper hasn’t launched yet…):

Picture of the boxes here: 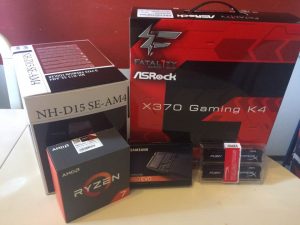 Case and PSU I’ve been running with have been an Antec P280 and a Corsair AX860i. In any case, the build starts on the next page…